There are 700 groups who want to take up the government's offer of creating a "Free School". 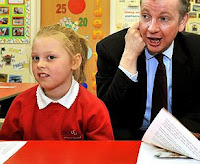 A pledge to allow the establishment of such schools formed a key part of the Conservatives' election manifesto.
Gove (right) said the main principle behind free schools, which will be independent but funded by the government, was "closing the attainment gap".
"The situation we have in this country at the moment is that we have one of the most stratified, segregated school systems in the developed world," the education secretary told BBC Radio 4's Today programme.
"In order to tackle the attainment gap, we want to learn from what's happened in America, Sweden, Canada, other countries that have given schools a greater degree of autonomy."
He said he expected teachers, parent groups, charities and philanthropists to express interest in setting up free schools.
"We want to do everything possible where we can extend the choice that parents have – but we're not talking about placing a burden on individual parents. We're talking primarily about liberating teachers."
Gove said there would no longer be a "situation where it's bureaucratic intervention, where it's national strategies designed from the centre to tell people how to run schools".
Before any free school could be established it had to be "rigorously" inspected by Ofsted, he added.
"Let's be clear – these are schools of choice ... They will be set up by people who want to enhance and improve what's already there," he said.

The teaching "profession" hate the idea so it must have some merit. I have heard many comments from the teacher's Union bodies, which go something like this:

MY NAME IS DAVE SPART, ORGANISER OF THE INTERNATIONAL BOLSHEVIK PARTY,  ASSISTANT DEPUTY GENERAL SECRETARY OF THE  THE NATIONAL COLLECTIVE OF PEDERASTS, PAEDOPHILES AND KINDRED DEVIANTS.PERVERTS AND RAPISTS ORGANISATION OF EDUCATORS AND LECTURERS, HAVE DECIDED THAT SO CALLED FREE SCHOOLS ARE THE EPITOME OF EVIL, ONE STEP AWAY FROM THE HITLER YOUTH  NOT THE WAY FORWARD IN EDUCATION.

THESE SCHOOLS WILL BECOME THE SOLE CONTROL OF THE PARENTS, WHO ARE WITHOUT DOUBT, THE GREATEST COLLECTION OF BNP LOVING FASCIST SCUM UNAWARE OF THE  DIFFICULTIES OF FILLING CHILDREN'S HEADS WITH THE COMMUNIST MANIFESTO OPERATING AN EDUCATIONAL ENVIRONMENT. TEACHERS ARE A BUNCH OF OVERPAID SEXUALLY DEPRAVED,IGNORANT FUCKWITS  HIGHLY EDUCATED GROUPING OF PROFESSIONALS, WITH MUCH EXPERIENCE OF SOCIALLY RETARDING AND MENTALLY ABUSING TEACHING THEIR CHARGES.

HOW ARE THE IDEAS OF OUR DEEP-SEATED FASCISTIC IDEOLOGY  ENVIRONMENTAL CARE AND HUMAN EQUALITY  TO BE SEARED INTO THE YOUTH ENCOURAGED IN THE CHILDREN?

WE ARE  FIGHTING TOOTH AND NAIL AGAINST CHANGE NOT AGAINST CHANGE PER SE, BUT WE BELIEVE THAT THE WHITE PARENTS WILL SEE THIS AS AN OPPORTUNITY TO GET THEIR KIDS OUT OF THE MULTICULTURAL, POLITICALLY CORRECT SHITHOLES WE WITH NEW LABOUR CREATED OVER THE PAST 15 YEARS CHOICE CAN ONLY BE MAINTAINED BY THE TINPOT STALINISTS AT COUNTY HALL LOCAL AUTHORITY SOCIAL ENGINEERING CONTROL.

This is why the "teaching" profession and the liberal elite chattering classes are agog.
They foresee a day when the parents realise that education has been destroyed as a going concern by the very people who endlessly claim to be the guardians of knowledge. They will loearn that the workshy bastards at the local school really don't need or indeed deserve £30,000 and 14 weeks holiday a year to do what they do. They will rapidly realise that teachers exist to supply the pederasts amongst us with fresh victims.

NB There are a few - A FEW - good teachers. getting fewer with every resignation or retirement.