Cameron loves the European Union, just like all good liberals. 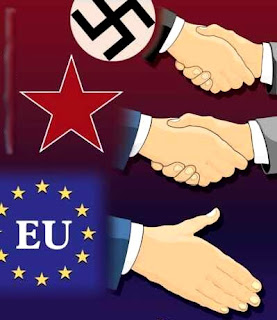 Reposted with thanks, as I feel this man has found one of the very nubs of the problem of Britain and the EU : the Tories have swindled us into believing they are eurosceptic (which many members and a few MP's certainly are) whilst, in practicable political terms they - the leadership - are most certainly europhile.

How was it for you? Dave’s Churchillian moment – you know, his blood, sweat and tears offering this afternoon that promised Britain freedom from the domination of dark forces on the continent – did it reassure you? The latest pledges from Cast-Iron Cameron do not include a referendum on the Lisbon Treaty, of course, but what metropolitan sophisticate would take those sort of histrionics seriously?

No, we are entering exciting new territory in the great Conservative Euro-scam. There will be a referendum – wait for it! – on all future EU treaties. The chancers in Brussels, having got everything they wanted, have made it clear they will not be writing any more treaties for a long time, so this is just a tad academic.

An important point: a Cameron government will not try to claw back any serious powers within six months or a year of taking office. No, our salvation will be worked out “over a parliament”. That is a polite term for five years of procrastination, to kick the EU issue into the long grass. But Dave will be pressing for “repatriation” of powers over employment law, the charter of fundamental rights and criminal law.

Uh-huh? Correct me if I am wrong, but surely those “competences” are all deeply embedded in reams of small print within the Lisbon Treaty. So, to renegotiate them, Dave and William Hague would have to re-open the treaty. But we are told the treaty is so set in concrete it cannot be revised and that is why voters cannot have a referendum on it. If the British electorate cannot revisit it, how can Dave and William do so? Do they take us all for mugs (evident answer: yes)?

But soft! This is by no means the limit of Cast-Iron Dave’s munificence. Through the mechanism of a sovereignty Bill, he is going to give us a constitutional court to protect us from EU encroachment. Just 24 hours after we saw a grey-faced Vaclav Kraus tell the world that, thanks to the ruling of an EU-compliant constitutional court, the Czech Republic had ceased to exist as a sovereign nation, Dave is offering us a similar chocolate fireguard to defend our sovereignty. Gee, thanks, Dave. What can I say? (I mean, what can I say that would be printable?)

A constitutional court would be a charter for judicial activism such as we daily see sell out British rights and interests to asylum seekers, terrorists, EU bureaucrats, et al. As for renegotiating a few minor aspects of the Lisbon Treaty, why does Cameron imagine he will carry more clout if he goes into the negotiating chamber without the massive endorsement of the electorate in a referendum, which would set real alarm bells ringing in Brussels, rather than with such a mandate?

All this Tory Euroguff is no more than a device to persuade gullible voters to stay with Dave and his forsworn party. Whether you fall for it or not is a simple intelligence test. Presumably, too, these scrappy, mini-commitments are as “cast-iron” as his previous unconditional pledge of a referendum. Tory rhetoric has now shifted, desperately, to a platform of preserving the remaining sovereign powers that Britain possesses post-Lisbon. What powers would those be, Dave?

The EU is popular with all liberals (left and right) because it BYPASSES Parliament, Constitution, and Law. The comrades in the Labour Party under Kinnock got this in the mid eighties - all their wet dreams could be foisted onto Britain not by long drawn out debates in Westminster, by arguing at the elections, but by diktat from an unelected Commissioner-Dictator from the EU Commission. And the lunatic libertarian "free market" & "no borders" Libertarians realised it earlier - imagine MILLIONS of Poles, Romanians, Bulgarians, Slovaks, falling over themselves to live on a pittance, in overcrowded slums, filling the chicken slaughtering factories, laying the foundations of glass and concrete Cathedrals of Capitalism.....

The Tories will not save us from tyranny because they are part of it.
Spewed forth by: Harry at 5:12 PM