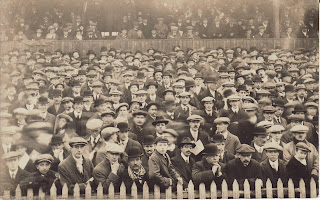 How Britain was, and should be again. A see of British faces, 1900.


The outcome of mass immigration, the desperate liberal attempt at creating a multicultural society has fallen flat on it's arse once again.

Enoch Powell told us, in plain English, what would come to pass. He was only wrong in his timing. Hordes of Immigrants, and the children of immigrants, with white youth blindly following,  following their coat-tails, are right now destroying the towns and cities of England. And that was the very purpose of their invitation in the first place: the destruction of all that was, and is, Britain.

We have little or no Law with which to combat this: the Police have been ruined with "sensitivity training" and  "multicultural training" , and the punishments which will be imposed are a joke, with accommodation of the quality of a three star hotel.
This has to be the last time.
The corrupt dog and pony show which passes for government has to be swept away from their positions of power. They have consistently lied about the number of immigrants, the worthwhileness of immigration, and the outcome of immigration: they would have you believe that everything to do with immigration has just been peachy, a great success, and, basically, anyone who disagrees is just a nasty old hater. These scum have sold my, and my children's, birthright. They have handed my nation to a vicious barbaric and savage horde.
But then the government is operated and owned by scum that can simply - up sticks and piss off abroad, if the shit hits the fan, can't they? They also ALWAYS get protection from the Law and the Police, and if necessary  - the Army.
Law must be once again returned to the streets. The government is UNFIT, so we must take power and restore it.
The flogging post, the gallows, the treadmill - all must return. The corrupt political appointments who pass for magistrates and judges must be hauled away and we must dispense Justice.
Most importantly - each and every immigrant must be removed back to their place of origin.
Spewed forth by: Harry at 2:27 AM