BBC lards it's staff in South Africa whilst laughing at the taxpayers. 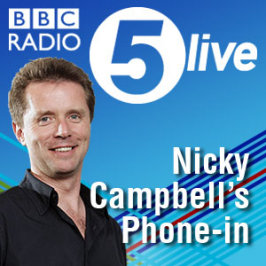 So it's world cup time again. The economy mazy be disappearing up it's own arse in Her Britannic Majesty's realms, but in liberal media world it's free salaried trips abroad again, with the likes of Nicky Campbell (among a cast of dozens) who have decided that the BBC should allow them a nice holiday.

You are getting made redundant?

You are facing pay cuts?

Credit cards or loans getting nasty?

Not for the staffs of Radio 5 Live and Five Live Extra, who are, at your expense, having the times of their lives. You could let Nicky and his BBC colleagues know how much you too would like a nice vacation at the taxpayer's expense, as he's having regular 0900 phone in.
Spewed forth by: Harry at 9:50 AM