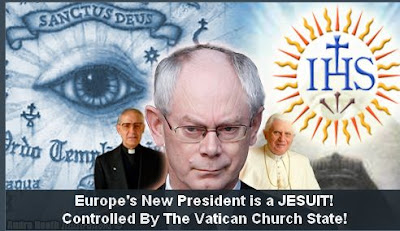 According to EU Observer, President Van Rompuy has said he is ‘looking to establish a clearer "hierarchy" among the EU institutions and member states to make it easier to deal with any future crises in the eurozone’.

The President is ‘in charge of a task-force looking into the future of economic governance (as opposed to government) in the EU’. He want ‘informal procedures and informal co-ordination mechanisms’ be set up to help ‘give some coherence within the EU structure’.

And the ‘informal structure’ is likely to include:

And, of course, President Van Rompuy himself.

Not since the days of Octavian, Lepidus and Mark Antony has Europe been ruled by a triumvirate. This was formed on 26 November 43BC with the enactment of the Lex Titia, and it existed for two fixed five-year terms. The three-man directorate possessed supreme political authority.

And we all know how it ended.

Or perhaps, with the inexorable demise of the classics, we don’t.

As Burke observed: ‘Those who don't know history are destined to repeat it.’

When will the Conservative Party take heed of the Father of Conservatism?
Link: Cranmer: Van Rompuy wants clearer 'hierarchy' to deal with future crises

So we are to be ruled by the hand picked sons of the Vatican. Each conversation will  be overseen by a Jesuit, Cardinals will be requested to give their approval, perhaps the Pope himself may start the issuance of Papal Bulls again.

But the majority of alleged Nationalists will keep screaming ITS ALL THE FUCKING JEWS, even as they watch the mass murder machine of the Jesuit inquisition start trundling, as the Pope encourages EU/NATO to relieve Israel of Jerusalem, and he starts the building of a new Temple on the site of the former Temple.