Multicultralism is communism: it is the death of the West. 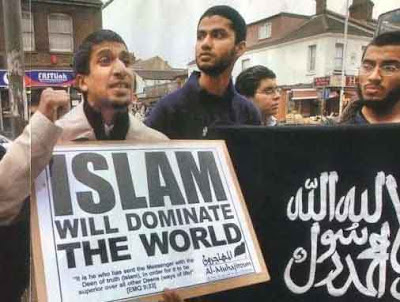 They know the game, they use the communists, who they will destroy once in power. In a certain way I admire them.

There can be no multicultural society. Wherever you look, you will find nothing like the communist dream. There NEVER has been.The communists are lying to you.

They claim that Rome were multicultural society. LIE.

Rome was founded by WHITE men and women, their armies were funded by and supplied by WHITE people.

Their error, like that of Egypt and Greece, was to become wealthy AND lazy - as we did in our own time.  They imported slaves from Africa and Asia to do the work which they themselves were too proud, lazy and feckless to do.

The Roman Empire became MULTIRACIAL, not multicultural.All must worship Caesar, all must become Romans in thought.

Eventually, these slaves were given freedom and allowed citizenship. And soon, the Roman  Empire collapsed. The more foreign elements which were foisted upon the citizenry, brining their own savage, barbaric DIFFERENT ways and beliefs with them, the faster the decline of the moral, philosophical and political basis of the Roman Empire, leading to disaster.

They DESTROYED the Roman Empire. Their own beliefs (good, bad or indifferent) were so at odds with the Romans that the barbaric, savage ways of the alien, overwhelmed the Romans.

Sound familiar? And in Britain today, the TV is used to spew these barbarities and this savagery into the minds of millions. The TV licence fee is used to destroy us, our culture, faith, beliefs. There is an army of communists pissing all over the British people, all funded by YOU.

The BBC, the Guardian, Socialist Workers Party - all one, indivisible. They are USING multiculturalism, and using Negroes and Asians, to DESTROY the West, it's moral, political and philosophical base. They HOPE that they can REPLACE white people with these alien elements, because they believe that the Negroes and Asians are more pliable, more modifiable to their Marxist desires.

We fund the prophets our own destruction.

Creative head of the college Micheal Jacob, who is the executive producer of the sitcom My Family starring Zoe Wanamaker said yesterday:

'I think there is a feeling perhaps that the BBC is a closed door for writers who are not necessarily white middle class.
'I wanted to say the door is open and that we want to find shows that reflect the fact Britain is a multicultural society. We hope the competition will attract entries from writers who may feel their lives are not currently reflected in television comedy.'

The BBC will have exclusive rights to develop the scripts, with the possibility of a commission further down the line.

The move follows criticism of the BBC in 2008, when Extras producer Charlie Hanson claimed the number of black people working in creative positions had not changed in 15 years, particularly within the comedy department.

If Mr. Charlie Hanson wants to see more black people working in TV, why doesn't he just fuck off to Nigeria? Why isn't Mr. Hanson working for another company producing multi-culti PC bullshit? Because no-one would bother to watch it, so only the BBC- Bolshevik to the core - can afford to vomit money at a piece of social engineering like this.


To reiterate the point:
The Christians and Jews fell foul of Rome because they would not view and worship Caesar as GOD, not because they were not European(Multiculturalism). Had they worshipped Caesar as God (Multiracial) , they would have faced no persecution.
Spewed forth by: Harry at 12:49 PM