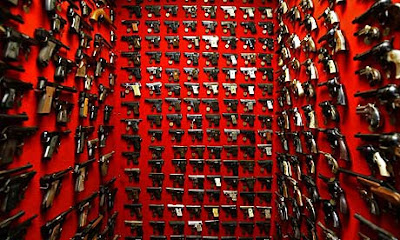 During 2009, violent crime declined for the third year in a row, with an estimated 5.3 percent drop from 2008 figures. Property crime continued to fall as well—for a seventh straight year—with an estimated decrease of 4.6 percent. That’s according to our just-released report, Crime in the United States, 2009. 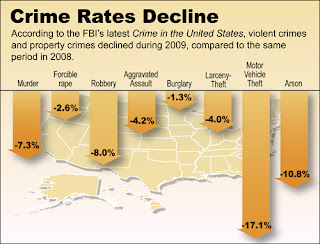 These latest statistics come 80 years to the month after we took over the responsibility of compiling and publishing the nation’s crime data from the International Association of Chiefs of Police. The categories back in 1930 were almost identical to what we have today—murder, rape, robbery, aggravated assault, larceny-theft, burglary, and auto theft. (Arson came later.)

Gun sales have been booming ever since Barack Obama's appearance on the presidential campaign trail. Government officials charged with reviewing civilian applications for the purchase of firearms report there was a 50 percent increase in requests for reviews between November 2007 and November 2008.


Obama's record of supporting gun-control measures gave gun sales another boost after his election November 4th, and sales have continued to rise in the early days of his presidency.

Gun sales rise.
Violent crime falls.
A great lie has been perpetrated in the United Kingdom, the Dominions, and it's tried in the USA too, but with far less success.
IN a nutshell:
"If you give up your right to own weapons, the State will protect you"
I say:
"Anyone with an iota of sense can see this for the filthy communist lie that it is."
All of the categories of violent crime - murder, rape, robbery, aggravated assault - have exponentially grown since the first real restrictive legislation of weapon ownership was introduced into Britain  - the Firearms Act 1920.


Here's the truth: the alleged democracy we live in is nothing more than a thinly veiled tyranny, which likes us all to pretend that the mob rule of democracy makes us 'free'. This of course patently untrue. Britain is under the control of the City of London, and only under the control of the City. Our "democracy" has become a sham, IF it was ever anything different.


Gun ownership was criminalized by the single group that would benefit 100%, using a false argument:


"Guns cause crime, so we must ban guns".


However, we know guns to be inanimate, dead objects, so that cannot be true. Only sentient human beings can act in a criminal way (it's why we don't take wolves and foxes to court for killing other animals or humans). Removing gun ownership is in reality a punishment not to the criminal, who ignores laws anyway by their very activities as a criminal, but to the law abiding folk, who lose their ability to defend themselves.


A girl who was abducted at the age of 14 and forced to work as a sex slave was yesterday praised for giving evidence which saw her abusers jailed.

The privately-educated teenager was picked up and plied with vodka and drugs, passed around groups of older men for sex and then forced to work as a prostitute.

Her ordeal highlights previously-aired fears that white schoolgirls are being groomed for underage sex by gangs of Asian men in northern England.


In countries where the Anglo Saxon law prevails - UK, USA and Canad, Australia and New Zealand - we are considered INNOCENT until PROVEN GUILTY, the cornerstone of the liberties we allegedly have.


So therefore, ownership of a gun, knife, brick or club, per se, does not make you a CRIMINAL. Only the act of criminal behaviour - stabbing someone, shooting someone, raping someone, robbing someone - is someone guilty of committing a crime.


We know that CRIMINALS commit criminal acts, and not guns. Therefore CRIMINALS, once  prosecuted, and found guilty should receive the punishment fit to their acts, not the innocent who have done nothing wrong.


The powerful want to keep you defenseless. They want the violence rape and murder on the streets. They want you terrified. Keep being scared, and you're not watching what they are really up to.
These Elite leaders of the Western folk - from Seattle Glasgow, from Wellington to Calgary - are terrified that if enough people work out that we are part of a dictatorship, owned and operated by Lucifer worshiping political psychopaths, we may want to overthrow them.
Free people can own weapons, slaves may have them issued in times of war, but slaves have no right to own them through free choice. That was the truth in the Roman Empire, and that is how it is today. Anyone who cannot freely purchase and own a gun is a SLAVE.