Environmental psychotics everywhere - to the top of the Washington DC greasy pole! 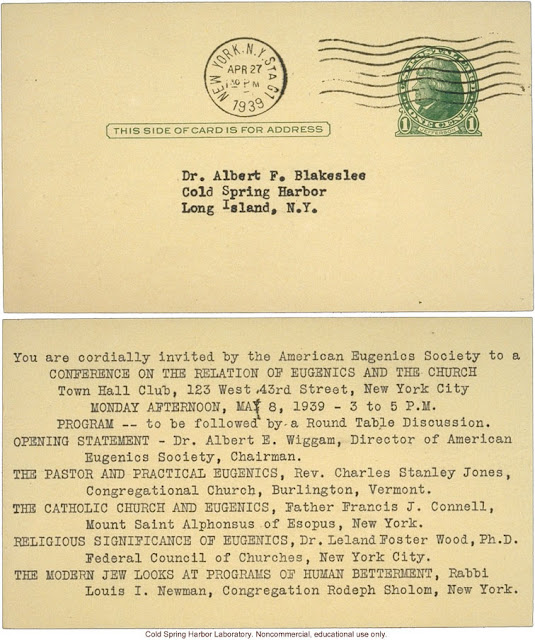 No Eugenics in the Scriptures..... only in the mind of the wicked.
These  environmentalists are criminal scum. Anyone who suggests Eugenics, population control, or genetic engineering is deranged, sick, and should be removed to a place of safety.

Those who most favour it should be willing to surrender themselves, their siblings, their children, grandchildren and friends first to the plan. Whilst you bwait, see how many Rocker fellers, Gates, Murdoch or Royalty family members are in the queue with you.

As for population: had we not repeatedly encouraged both the middle east - via failing to find an alternative to crude oil, and giving them an enormous unearned income - and Africa - sixty years of charity foods and "development" aid ,  there wouldn't be any problem, because their populations wouldn't be out of control, would they? And in te US? Illegal immigration of Latinos is destroying the US economy, agriculture and infrastructure.

Forced abortions. Mass sterilization. A "Planetary Regime" with the power of life and death over American citizens.


The tyrannical fantasies of a madman? Or merely the opinions of the person now in control of science policy in the United States? Or both?


• Women could be forced to abort their pregnancies, whether they wanted to or not;


• The population at large could be sterilized by infertility drugs intentionally put into the nation's drinking water or in food;


• Single mothers and teen mothers should have their babies seized from them against their will and given away to other couples to raise;


• People who "contribute to social deterioration" (i.e. undesirables) "can be required by law to exercise reproductive responsibility" -- in other words, be compelled to have abortions or be sterilized.


• A transnational "Planetary Regime" should assume control of the global economy and also dictate the most intimate details of Americans' lives -- using an armed international police force.

Impossible, you say? That must be an exaggeration or a hoax. No one in their right mind would say such things.

Well, I hate to break the news to you, but it is no hoax, no exaggeration. John Holdren really did say those things, and this report contains the proof. Below you will find photographs, scans, and transcriptions of pages in the book Ecoscience, co-authored in 1977 by John Holdren and his close colleagues Paul Ehrlich and Anne Ehrlich. The scans and photos are provided to supply conclusive evidence that the words attributed to Holdren are unaltered and accurately transcribed.

[UPDATE: Make sure to read the new statements issued by the White House and by John Holdren's office in response to the controversy raised by this essay -- you can see them below following the Ecoscience excerpts, or you can jump directly to the statements by clicking here.]

This report was originally inspired by this article in FrontPage magazine, which covers some of the same information given here. But that article, although it contained many shocking quotes from John Holdren, failed to make much of an impact on public opinion. Why not? Because, as I discovered when discussing the article with various friends, there was no proof that the quotes were accurate -- so most folks (even those opposed to Obama's policies) doubted their veracity, because the statements seemed too inflammatory to be true. In the modern era, it seems, journalists have lost all credibility, and so are presumed to be lying or exaggerating unless solid evidence is offered to back up the claims. Well, this report contains that evidence.

In any sane society this man would be locked away for  ever, in a padded cell wearing a strait jacket with an anti-bite mask.

Of course, Holdren wrote these things in the framework of a book he co-authored about what he imagined at the time (late 1970s) was an apocalyptic crisis facing mankind: overpopulation. He felt extreme measures would be required to combat an extreme problem. Whether or not you think this provides him a valid "excuse" for having descended into a totalitarian fantasy is up to you: personally, I don't think it's a valid excuse at all, since the crisis he was in a panic over was mostly in his imagination. Totalitarian regimes and unhinged people almost always have what seems internally like a reasonable justification for actions which to the outside world seem incomprehensible.

Below you will find a series of ten short passages from Ecoscience. On the left in each case is a scanned image taken directly from the pages of the book itself; on the right is an exact transcription of each passage, with noteworthy sections highlighted. Below each quote is a short analysis by me.

And at the bottom of this report, I provide untouched scans (and photos) of the full pages from which all of these passages were taken, to quash any doubts anyone might have that these are absolutely real, and to forestall any claims that the quotes were taken "out of context."

Ready? Brace yourself. And prepare to be shocked.

More here. Thanks to Zombietime.
Spewed forth by: Harry at 3:05 AM