Al Qaeda is the creation of and the ally to the CIA/MOSSAD/MI6, and now NATO too 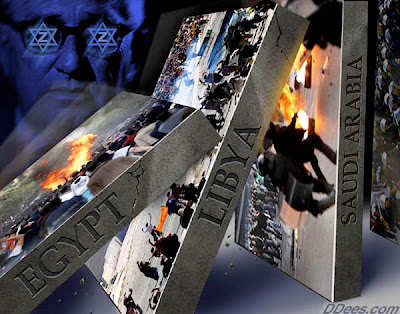 I couldn't care what internecine, Byzantine struggles the Islamic world chooses to go through. These murderous, vicious, Koran wielding psychotics are free to believe what they want, in their own nations. Their business is their business, and I and no other white, Westerner, has any right to dictate their style of life.

However, the Cameron/Clegg government of Britain, along with the Jewish chap Sarkozy's in France, and - whatever he may be, ?Negro, ?Moslem, ?US Citizen, - US "President" Obama, have decided to involve us in what could be a thirty year Crusade war in Libya, so it is my business, and SHOULD be yours.

Yes, it's about Oil.
Yes, lots of weak, controlled regimes surrounding Israel will be welcomed.
And North Africa will be slowly returned to the sphere of European political and military control, under the tutelage of Al Qaeda supporting Wahhabi style clerics working directly for Israel, Vatican and Washington DC, a la Afghanistan.

Al Qaeda, bless it, has gone from being Public Enemy No. 1 to the West's greatest ally.

Evidence is emerging that United States forces are waging war in Libya on behalf of rebels whose ranks include jihadis who fought against the U.S. in Afghanistan, Pakistan, and Iraq.

Britain's Daily Telegraph reports that Abdel-Hakim al-Hasidi, a leader of U.S.-supported rebel forces in the fighting around Adjabiya, went to Afghanistan in 2002 to fight against the "foreign invasion" -- that is, U.S. troops who invaded Afghanistan in retaliation for the September 11 attacks. The Telegraph says al-Hasidi told an Italian newspaper, Il Sole 24 Ore, that he was captured in 2002 in Peshawar, Pakistan.

There's a turn up for the books, wouldn't you say?


(1) Al Qaeda is not a centralized organization, but rather a gaggle or congeries of fanatics, dupes, psychotics, misfits, double agents, provocateurs, mercenaries, and other elements. As noted, Al Qaeda was founded by the United States and the British during the struggle against the Soviets in Afghanistan. Many of its leaders, such as the reputed second-in-command Ayman Zawahiri and the current rising star Anwar Awlaki, are evidently double agents of MI-6 and/or the CIA. The basic belief structure of Al Qaeda is that all existing Arab and Moslem governments are illegitimate and should be destroyed, because they do not represent the caliphate which Al Qaeda asserts is described by the Koran. This means that the Al Qaeda ideology offers a ready and easy way for the Anglo-American secret intelligence agencies to attack and destabilize existing Arab and Muslim governments as part of the ceaseless need of imperialism and colonialism to loot and attack the developing nations. This is precisely what is happening in Libya today.

(2) Al Qaeda emerged from the cultural and political milieu of the Moslem Brotherhood or Ikhwan, itself a creation of British intelligence in Egypt in the late 1920s. The US and the British used the Egyptian Muslim Brotherhood to oppose the successful anti-imperialist policies of Egyptian President Nasser, who scored immense victories for his country by nationalizing the Suez Canal and building the Aswan High Dam, without which modern Egypt would be simply unthinkable. The Muslim brotherhood provided an active and capable fifth column of foreign agents against Nasser, in the same way that the official website of Al Qaeda in the Islamic Maghreb is trumpeting its support for the rebellion against Colonel Qaddafi.

(3) The Bush administration policy used the alleged presence of Al Qaeda as a pretext for direct military attacks on Afghanistan and Iraq. The Obama administration is now doing something different, intervening on the side of a rebellion in which Al Qaeda and its co-thinkers are heavily represented while attacking the secular authoritarian government of Colonel Gaddafi.

So really, the fearsome and mighty "Al Qaeda" is nothing more than a gang of charlatans, mercenaries and religious nuts, organized by employees Western security services.

They are allies where they used to be enemies. They are both ally or enemy at different times, and at the same time, when necessary. George Orwell describes how this can be in 1984.

The local patsies of the CIA/MOSSAD/MI6 are the Libyan Islamic Fighting Group (LIFG). Who?


After weeks of intense fighting, the Libyan Islamic Fighting Group (LIFG) formally declared its existence in a communiqué calling Qadhafi's government "an apostate regime that has blasphemed against the faith of God Almighty" and declaring its overthrow to be "the foremost duty after faith in God." This and future LIFG communiqués were issued by Libyan Afghans who had been granted political asylum in Britain.... The involvement of the British government in the LIFG campaign against Qadhafi remains the subject of immense controversy. LIFG's next big operation, a failed attempt to assassinate Qadhafi in February 1996 that killed several of his bodyguards, was later said to have been financed by British intelligence to the tune of $160,000, according to ex-MI5 officer David Shayler. While Shayler's allegations have not been independently confirmed, it is clear that Britain allowed LIFG to develop a base of logistical support and fundraising on its soil. At any rate, financing by bin Laden appears to have been much more important. According to one report, LIFG received up to $50,000 from the Saudi terrorist mastermind for each of its militants killed on the battlefield." [2005]

"Americans, Britons and the French are finding themselves as comrades in arms with the rebel Islamic Fighting Group, the most radical element in the Al Qaeda network [to bring down Gaddhafi]. Secretary of State Hillary Clinton admitted the risks of the unholy alliance in a congressional hearing, saying that the Libyan opposition is probably more anti-American than Muammar Gaddhafi. A decade ago, this very same delusion of a Western-Islamist partnership in Kosovo, Bosnia and Chechnya ended abruptly in the 9/11 attacks."

NB: Kosovo is rich in minerals, and who knows what else, and is now out of the grasp of Serbia until it's gutted of it's resources, so therefore it's out of the control of Serbia's old ally, Russia. Islamic friends of Al Qaeda were used, as they are to destabilise parts of Russia ..... in Chechnya for example.

This is interesting, just why is Canada attacking Libya ....


But there is more to it than pleasing the Great White North’s version of the military-industrial complex. On March 21, The Financial Times reported that western oil companies were worried that if Gaddafi defeated the rebels in the east of Libya he would nationalize their operations out of anger at the west’s duplicity. Presumably, this includes Suncor, Canada’s second largest corporation, which signed a multi-billion dollar 30-year oil concession with Libya in 2008.

Home to the second largest amount of Canadian investment in Africa, instability in Libya has put a couple billion dollars worth of this country’s corporate investment in jeopardy. Dru Oja Jay, editor of the Dominion and a candidate for the Mountain Equipment Co-op Board of Directors, notes “Canadian investors are legitimately worried about what’s going to happen to the $1 billion signing bonus Suncor paid out to the Libyan government, or whether SNC-Lavalin is going to recoup its investments in the country, which is home to 10 per cent of its workforce.”

boundarysentinel.com [direct link]
So if Canada is worried about Oil investments in Libya, imagine the trail of fear displayed in the boardroom of, say, BP .....
Egypt and Libya, both dallying with China, are now going to behave themselves and deal only with the global corporations of the Square Mile. China locked out of the Oil rich exports, less co-operative Egypt, look for further trouble in Algeria too..... the Moslem Brotherhood was used.

And Syria, where the same game plan is now in play? They were offering Russia the rental of a naval depot in the Mediterranean .....

Western diplomats say Moscow and Damascus have also been mulling the possibility of building a Russian naval base in Tartous, on Syria's Mediterranean coastline, granting the Russians a key warm-water facility.

The Soviet Union was once Syria's main weapons supplier, leaving Damascus saddled with a $13.4 billion arms-sales debt at the end of the cold war in 1990. In 2005, Russia wrote off almost three quarters of the debt, launching a new era of improved cooperation and fresh arms deals.