The British Establishment is as depraved and deluded as that of Nero and Caligula. 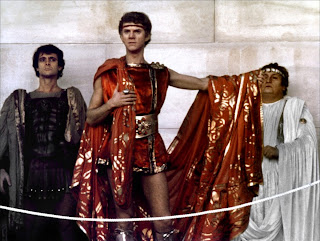 This is an interesting reply to a comment, from the author of a blog post at Occidental dissent. The post is interesting too, and well worth a read.

Hunter Wallace says:July 26, 2011 at 4:44 pm Nero wasn’t nearly as deluded as David Cameron.
Among the Ancients, there were individual emperors who were moral degenerates or who were crazy (Caligula and Nero being the most famous examples), but Roman society was too reality based to succumb to fantasy ideology.
Back then people could see that Nero was crazy and out of control. Now, thanks to fantasy ideology, which pervades entire societies thanks to television and movies, and the general detachment of “symbolic engineers” in office parks from the physical creation of wealth, lunatics can sound completely normal and mainstream.
Compare David Cameron to Nero. The former thinks that Muslims can successfully be integrated into British society. Nero plan’s was to weep before his enemies in order to impress them.
What about Caligula’s great victory over Poseidon? Isn’t that like LBJ’s War on Poverty?