D'oh! The Cops in Norway knew the killers name BEFORE his arrest:


Despite being portrayed by the media as inept due to the length of time it took them to reach the island of Utoeya, it has now emerged that police knew the name of gunman Anders Behring Breivik before they even arrested him, a startling admission that prompted one of Britain’s top news anchors to question how authorities were aware of the gunman’s identity in advance.
During his Channel 4 News broadcast on Friday evening, host Jon Snow asked “why police knew the killer’s name by the time they had arrived on the island,” reported the Telegraph live blog.
“He surrendered the moment police called his name 3 minutes after they arrived. What we don’t know is how the police knew the terrorist’s name before they arrested him,” said Snow, who is recognized as one of Britain’s most trusted news anchors, and cannot be dismissed as a “conspiracy theorist”.
http://www.prisonplanet.com/police-knew-gunmans-name-before-arrest.html

They haven't been able to make Multiculturalism work spontaneously, in the Western nations, so now these terrible State organised and controlled actions in Norway are going to be the lynch-pin to forcing acceptance of Multiculturalism, with the fear of being seen as a "Terrorist", "Nazi" or potential murderer.
This whole conspiracy is to switch the fear rhetoric of the tyrannous scum who operate Western governments, from Islamic terrorism (tired, wearing thin) , to "Homegrown" terrorism (the terrorists are everywhere, you can't identify them etc). ID cards, more CCTV, longer holding by the Police without charge blah blah blah ..... The Sky News reports that the Police (front men for MI5) are already attacking legitimate political organisations in the UK:

His handlers in MOSSAD/CIA/MI6 couldn't even be bothered to create a "new" backstory for this patsy.

The 32 year-old appears to have quoted verbatim large sections from the preaching of Theodore Kaczynski in his 1500 page online rant.Breivik had “copied and pasted” almost a dozen key passages from the 69 year-old’s 35,000 manifesto, only changing particular words such as “leftist” with “cultural Marxist”.It remains unclear what his motivations were, but experts said it appeared he had taken “inspiration” from Kaczynski whose two decade parcel-bomb terror campaign killed three people and 29 injured others.

They just rehashed someone else's ramblings.
The whole story stinks:

Given the fact that the establishment media got it spectacularly wrong by instantly jumping to the conclusion that Friday’s deadly attack in Norway was the work of Al-Qaeda Muslims, placing complete trust in the details emerging about gunman Anders Behring Breivik would be foolish, especially since there are innumerable inconsistencies and contradictions that need to be studied before a fuller picture of what motivated the bloodshed can be established.
The rush to blame Muslims for the carnage, hastily parroted by an onslaught of mainstream “terror experts,” was a startling insight into how the propaganda that fuels the war on terror is so unquestionably bounced around the echo chamber of the corporate media.
It’s also a reminder that the mainstream press instantly falls in line with whoever the establishment designates the enemy du jour to be at any given time. Now that Muslims have been so vehemently demonized as terrorists, it’s the turn of so called “right-wing extremists,” or anyone who disagrees with mass immigration, loss of sovereignty and globalist financial looting, to feel the heat.
The effort to smear European conservatives as unhinged radicals who harbor simmering urges for bloodlust is now in full swing, and it’s a demonization campaign firmly founded on the carefully crafted public portrayal of Anders Behring Breivik.

However, it’s quickly becoming apparent that just as many eyewitnesses reported two gunmen on the island where the rampage unfolded, there are two different personas behind Breivik himself.
Indeed, there are two different Facebook profiles for Breivik, one from before the massacre and one from after. The latter profile appears to have been embellished and deliberately altered to emphasize the notion that the gunman was motivated by his “Christian conservative” beliefs.

Press TV, mouthpiece of the Islamic Theocracy of Iran, which really is a rather nasty vicious little State run by theological psychopaths, , is cock-a-hoop:


Islam, and their useful white European idiots (such as this "Peter Ruston/ Chris Bamberry pairing in the video above)  are now empowered by the Elites to scream Hate, and Terrorist, at any disagreement with Islamic theological stances, and with attempting to turn the savage barbarian tide away from European shores.
White people of Europe are in real trouble, worse than they have EVER been. rememberer: these hate ridden bastards - useful idiots of the Western oligarchies, are the true face of Islam. People in Europe aren't frightened of Islamics and Islam for reasons of terrorism,but because of the murder and mayhem prevalent in whatever society Islam gains control of. They need to go from Europe by choice or force. They do not belong here, any more than white folk belong in Iran, Saudi Arabia or Syria. 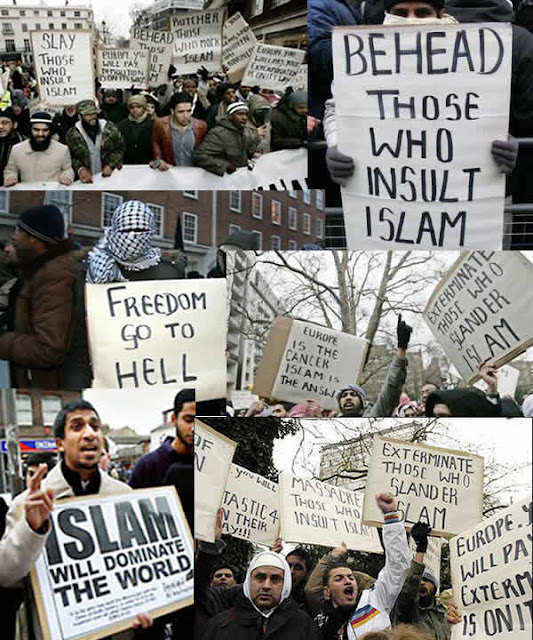 Anyhow: these are interesting alternative media takes on the situation of the shooter and Norway:  :
http://classicalvalues.com/2011/07/not-civilians-but-traitors-to-be-executed/
http://www.occidentaldissent.com/2011/07/25/knights-templar-honesty-and-hypocrisy/
http://thebuckshotter.blogspot.com/2011/07/oslo-bomber-is-freemason-and-zionist.html