Immigrants are flooding int5o every corner of the United Kingdom. It is no longer the case that it's only London, Birmingham, Manchester and Bradford.

They are fighting a war with the womb. They are outbreeding the indigenous WHITE population by 2 to 1. 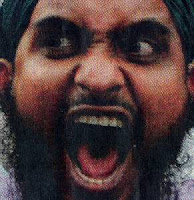 Nothing by accident, all done deliberately by a small, committed group of psychopaths. This lunatic lives in Sweden. They are all across Europe, all serving the Synagogue of Satan, including Britain.